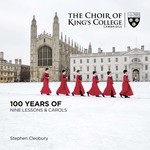 For many, Christmas wouldn't be Christmas without the sound of carols sung from King's College Chapel. Each year over the festive period millions around the world enjoy the choir's A Festival of Nine Lessons & Carols. This two-part collection celebrates 100 years of the iconic service with a mix of brand-new performances and historical recordings not heard since the original BBC broadcasts. The first part of this special album tells the story of the service's long history, featuring Directors of Music David Willcocks, Philip Ledger and Stephen Cleobury in recordings spanning from 1958 to 2017. A selection of traditional favorites are accompanied by world premiere performances of contemporary carols, commissioned by the college from leading contemporary composers, including Judith Weir, Arvo Pärt, Thomas Adès and John Tavener. The second part of the album features brand-new recordings by today's choir, who shine in cherished compositions such as We Three Kings, The Shepherd's Farewell and O Holy Night.

"let me say that almost all the repertory here has something substantial to offer listeners. The sound reproduction is very good, though less so on the first eight tracks; i.e., those led by Willcocks and Ledger." MusicWeb Dec 2018

Hopkins, J H: We three Kings of Orient are

Jackson, F: Can I not syng but hoy?

Joubert: There Is No Rose

Bach, J S: How shall I fitly meet Thee?

The Music Of King's
more suggestions…