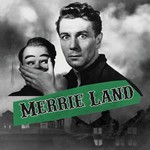 The Good, The Bad & The Queen
Merrie Land (LP)

The Good, The Bad & The Queen is a band comprised of Damon Albarn, Paul Simonon, Tony Allen and Simon Tong. Following an eleven-year hiatus since their eponymous debut, the four musical storytellers are back with Merrie Land.

Produced by Tony Visconti and The Good, The Bad & The Queen, Merrie Land contains 10 new songs, written during the current period in which the UK is preparing to leave the European Union, creating a reluctant goodbye letter, a series of observations and reflections on Britishness in 2018.

A1. Introduction
A2. Merrie Land
A3. Gun to the Head
A4. Nineteen Seventeen
A5. The Great Fire
A6. Lady Boston
B1. Drifters & Trawlers
B2. The Truce of Twilight
B3. Ribbons
B4. The Last Man to Leave
B5. The Poison Tree