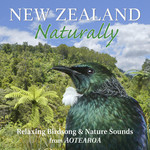 Listen to New Zealand...forests, birdsong and streams. Peaceful sounds from the Southern Hemisphere to soothe away the stresses of life.

This is the updated version of "Aotearoa" - the biggest selling New Zealand birdsong album on the market and contains extra tracks.

These relaxing recordings capture the true beauty of New Zealand's natural sounds: from enchanting birdsong, the peaceful Pacific ocean and glowworm caves to the power of distant rolling thunder and geothermal activity.

The album features the calls of many birds including the Tui, Korimako (Bellbird), Kaka and Kokako; gently calming early morning forest and bush atmospheres; the sounds of hot springs and bubbling mud; and the ebb and flow of the sea. Some of the land-based tracks were recorded on Tiri Tiri Matangi in our very own Hauraki Gulf - a bird watcher's paradise.

Enjoy relaxing to these 'Postcards in Sound' from a remarkable natural haven!