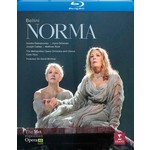 To open the Met's 2017-18 season, powerhouse soprano Sondra Radvanovsky tackled one of opera's most fearsome roles, the title druid priestess of Bellini's Norma, who wrestles with love and betrayal before making the ultimate sacrifice on a funeral pyre.

.."Two decades and 200 performances into her Metropolitan Opera career, soprano Sondra Radvanovsky achieved ultimate prima donna status last night. Wielding a potent voice and fierce determination, she opened the company's season with a gripping and insightful performance of Vincenzo Bellini's Norma....conductor Carlo Rizzi offered much support, leading the Met orchestra with alert, flexible tempos and opening a number of small cuts that, shamefully, are still regarded as standard in most opera houses." The Observer