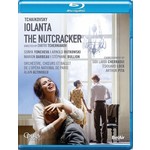 In March 2016 Russian stage director Dmitri Tcherniakov created a revolutionary production for the Palais Garnier in Paris - the bringing together of Tchaikovsky's opera Iolanta and ballet The Nutcracker, which was to become one of the key events of the Paris Opera season. Bulgarian soprano Sonya Yoncheva delivers an flamboyant interpretation of the blind princess Iolanta, and shares the stage with Polish tenor Arnold Rutkowski and Ukrainian bass Alexander Tsymbalyuk. The internationally renowned French conductor Alain Altinoglu joins forces with the Paris Opera Orchestra and Chorus, while the Paris Opera Ballet, among which Marion Barbeau- a radiant Marie - and the Etoiles Stéphane Bullion and Alice Renavand, revives the most popular ballet of all times.