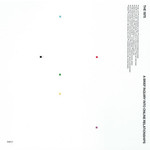 The 1975
A Brief Inquiry Into Online Relationships

"The 1975 are a band for our times. After the overstuffed sprawl of 2016's I Like It When You Sleep, For You Are So Beautiful yet So Unaware of It, a record that in spurts revealed Matt Healy's immense talent as a songwriter, A Brief Inquiry into Online Relationships makes good on the band's promise. The first of two planned records in a six-month period, the album is a chaotic, scattered document of modern society that manages tremendous insight into a life lived online that sidesteps condescension or generalization. With ambition being an understatement, the band combines melodramatic power ballads, glitchy Auto-Tune, jazz crooners, and stadium-sized Britpop in a way that feels like a pointed response to the algorithmic flattening of modern pop. With a willingness to fail, and they occasionally do so throughout, the 1975 approach moments of profundity that are rare for a rock band in 2018." - Consequence of Sound (rating A-)