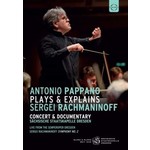 Antonio Pappano and the Sächsische Staatskapelle Dresden are presenting a symphonic work with particular relevance for Dresden: Rachmaninoff's Symphony No. 2, which was written during the composer's years at the Saxon residency.

The Petersburg premiere of Rachmaninoff's 1st Symphony became a fiasco. This rejection, by the public and the critics, plunged the composer into a creative crisis. In 1906, Rachmaninoff moved to Dresden and composed his successful and highly dramatic Second Symphony.

Included on this DVD are the full concert performance with Maestro Pappano and Sächsische Staatskapelle and the documentary Sergei Rachmaninoff in Dresden.

It is the first time that Sächsische Staatskapelle performed Rachmaninoff's Symphony No 2 under the baton of Antonio Pappano.

The documentary includes extensive archive material, photos, scores and posters from Dresden in the years between 1906 and 1920.