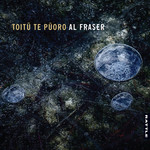 All performances and all compositions by Al Fraser
Vocals on Hıkoi by Ariana Tikao.

Al Fraser is one of the most critically acclaimed and prolific performers of nga taonga puoro of his generation. He has collaborated on some of the most rigorously artistic, culturally diverse and significant projects in Aotearoa/New Zealand, notably with Dr Richard Nunns, Trinity Roots, Gillian Whitehead, and and the New Zealand Symphony Orchestra. These projects span numerous genres, including jazz, experimental, ambient, and classical.

Toitu Te Puoro is his fifth solo album, but he also has collaborated on projects such as Tahu, The Woolshed Sessions, Oro, Shearwater Drift and Ponguru. Working in collaboration with Steve Garden and releasing the album on Rattle ensured that the work reached its full potential, and to have a deserved place among the label's catalogue of award-winning and critically acclaimed albums.