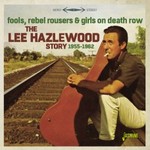 The late LEE HAZLEWOOD is one of R&R and Pop's most iconic cult figures, with a huge reputation as a producer, songwriter and singer.

This 35-track compilation presents an eclectic selection of rarities, juxtaposed alongside a handful of his early hits.

Hazelwood's early productions are particularly collectable, notably his own recordings.

Included herein are his five earliest known demo's, from 1955/56, which highlight his distinctive, resonant baritone.

Also included are the sides he recorded billed as Mark Robinson and The Shacklefords, plus his near-legendary 'Girl On Death Row'

This compilation is a mandatory purchase for all Lee Hazlewood collectors/completists.