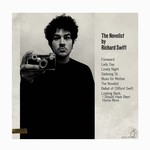 Richard Swift's duo debuts, The Novelist and Walking Without Effort, are fraternal twins wrestling with same Big Questions in opposite ways - one toiling in a cinderblock basement slugging typewriter coffee; one lost on the Pacific Coast Highway, looking again and again for something in a sunset that just ain't there.

The Novelist, Swift's highly acclaimed, succinct, eight song, nineteen minute and thirty-eight second-long, audiophile archivist experiment immediately ushers the listener deep into the recesses of Swift's creative core for a kaleidoscopic trip aboard an intergalactic vaudevillian steamship with a speakeasy code-word. Yet, The Novelist is only one small manifestation of Swift's entire musical manifesto and only one-half of this double-disc set.

A slight step eastward from the eclectic musings of The Novelist, Walking Without Effort intentionally paints another image, and baptizes believers born-again into Swift's unique brand of sonic schizophrenia. Gramophones are replaced by 8-tracks and Persian rugs are covered with shag as Swift nods to the early 70's solo efforts of McCartney and Harrison, while waving to Burt Bacharach and Van Dyke Parks.

Much sought after release, repressed on vinyl for first time in years.