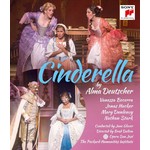 Cinderella is the first full-length opera by child music prodigy Alma Deutscher. Born in 2005, Deutscher is an incredibly gifted composer, violinist and pianist who has received critical and international acclaim for her compositions.

Deutscher started playing the piano at the age of two and the violin at the age of three. She has since gone on to compose for piano, violin and chamber ensembles

Written by Deutscher when she was only 8 years old, Cinderella is a four-act opera which puts a twist on the classic fairy tale. Deutscher's Cinderella is set in an opera production company that is run by her Evil Stepmother. Cinderella, who is a natural composer discovers a poem written by the Prince and sets it to music

The opera made its debut in Vienna in 2016, where it received a standing ovation as well as overwhelmingly positive reviews from critics.

As a result of the success of Cinderella in Austria, the opera made its American debut only a year later, in San José, with seven sold out performances.

"Soprano Vanessa Becerra sings Cinderella with vivacious, ardent and luminous voice, coasting through the various musical moods the young composer has set for her with "elan" and great warmth. From her first tones, when she dispenses with the um pah-pah of the double-bass score for a more harmonious and intriguing melody, she shows us both as character and performer her musical range. The lovely melody sung in the birch forest by the unhappy Cinderella, she repeats throughout the opera, a leitmotiv for the creative heart and soul searching for her place in the world, one of Alma Deutscher's own wishes in writing this music and some of her other works. It is, of course, Emeline, her fairy-godmother, played by contralto Claudia Chapa, whose round and sonorous voice, particularly in the middle register - she plays Azucena in other productions - who helps make this happen." OperaWire

"As a dramatic construct, the opera's a marvel for one so young...Deutscher starts with two gifts on her side: natural talent (I'll avoid the word genius) and sincerity. Cinderella may be pastiche, but at the same time nothing is fake." BBC Music