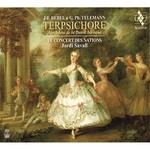 On this release, Jordi Savall summons Terpsichore - the Muse of dancing and choral song. Lively and colorful compositions by Telemann and Rebel enable us to experience the apotheosis of dance, at a time when the baroque repertoire had reached its highest degree of sophistication.

"Baroque instrumental music often took the form of dance suites, which allowed considerable flexibility in the arrangement of minuets, sarabandes, gavottes, bourrées, chaconnes, allemandes, and courantes, mixed with character pieces and even scenic tableaux in the much larger presentations of court ballets. In Terpsichore: Apothéose de la Danse baroque, a splendid 2018 AliaVox release by Jordi Savall and Le Concert des Nations, works by Jean-Féry Rebel and Georg Philipp Telemann are compared side-by-side to indicate the commonality of practices at the time, as well as the variety of dance music in the hands of two different masters. Rebel had been court composer to Louis XIV, and his ballet Les Élémens was his most audacious work, offering many novelties that appear to a less pronounced degree in Les Caractères de la danse, La Terpsichore, and Les plaisirs champêtre. Telemann was a younger contemporary of Rebel and a friend of Bach and Handel, and his wide-ranging suites, also called Ouvertures, reflect his absorption of many influences, both French and German, as well as innovations from Italy. Savall and Le Concert des Nations play with scintillating tone colors and lively rhythms in period style, and this collection is a feast for the ears, with many delightful displays of virtuosic playing and free ornamentation. While some of Savall's recordings on AliaVox have been adversely affected by overly reverberant acoustics, especially in church settings, this concert recording has all the benefits of the resonant Helmut List Hall in Graz, Austria, without any loss of clarity or separation." - All Music 4.5/5