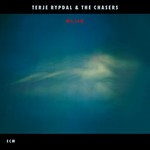 Terje Rypdal, Bjørn Kjellemyr, and Audun Kleive continue where they left off on Chaser with this equally memorable set. Blue is not a companion album, however. It is the yin to the other's yang: on the surface they are solid teardrops of color, but closer listening reveals an eye of one in the other. Swiveling in at a mere 90 seconds, "The Curse" provides an alluring introduction that fades all too quickly into the bass-driven groove of "Kompet Går." Rypdal may run like a melodic rat with his tail on fire at first, but soon paints the sky with cool winds in a free anthem of strings and rhythms. These last are ever an audible undercurrent to what's going on above the surface. Their analog warmth lends particular comfort to "I Disremember Quite Well," where it is enhanced by a hum of bass. Rypdal's inescapable lyricism is the calm before a quiet storm that rains liquid flame into the cauldron of "Og Hva Synes Vi Om Det." Every utterance of the bass is like a bubble of lava popping, every echo a dying bird going down in smoke. Even the drum machine in "Last Nite" somehow enchants us, holding on to Rypdal's feathered back as he peaks above the clouds in denial of the deserts below. The title track lowers us slowly on the bass's thickly wound strings, Rypdal the melodic bait on this hook, twirled like a ribbon around the finger of a forgetful deity. "Tanga" gets us back into the swing of things with a catchy vamp, even as Rypdal works a magical mood far away. This excursion grinds to a halt in a crunchy solo before "Om Bare," a solo punctuated by outbursts from synth, casts us into the sea.