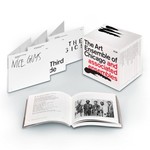 The Art Ensemble Of Chicago & Associated Ensembles is a 21-CD limited and numbered edition issued as the standard-bearers of Great Black Music prepare to celebrate their 50th anniversary. Both the Art Ensemble of Chicago and ECM Records were founded in 1969, and there have been many shared experiences. As Roscoe Mitchell says, "It has been amazing to have taken this journey together."

This beautifully-designed box set incorporates a 300-page book reprising all original album covers, liner notes and poetry (by Joseph Jarman), as well as quotes from Art Ensemble members and the press, new texts by Craig Taborn, Vijay Iyer and George Lewis, a preface by Manfred Eicher, and an introduction by Steve Lake. Plus: many photographs (some previously unpublished), archival documents, and more.

"The Art Ensemble of Chicago is alone in jazz history for reaching back conceptually to long before there ever was anything called jazz and moving toward a future beyond category."
- Nat Hentoff