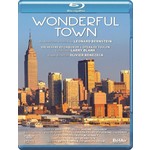 For the first time on DVD & Blu-ray in scenic version, and to celebrate Leonard Bernstein's centennial, the delightful Wonderful Town filmed during its French premiere at the Opéra de Toulon!With a keen sensitivity to the demands and specificities of the American "musical", and after the triumph of Sondheim's Follies in 2015, the Opéra de Toulon once again embarked on a Broadway adventure with the French premiere of Bernstein's Wonderful Town, and brought back for the occasion stage director Olivier Bénézech, a major connoisseur of the genre.A true declaration of love to the city of New-York, Wonderful Town tells the tale, with a boisterous rhythm and vast amounts of jazzy tunes, of two sisters from Ohio looking for success and glory in the big city. Lighter in tone than later works like West Side Story or Candide, its smart combination of the different musical traditions one could hear when wandering in the streets of New-York, its accomplished orchestral writing and colouring, and its vivid sense of comedy earned it no less than five Tony awards when it premiered in 1953.