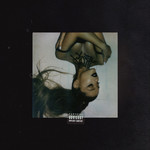 Ariana Grande
Thank U Next

Thank U, Next is the upcoming fifth studio album by American singer Ariana Grande. Its title track was released as the album's lead single on November 3, 2018, with the second single "7 Rings" releasing on January 18, 2019. The album is a follow-up to her fourth studio album, Sweetener (2018).

Imagine
Needy
NASA
Bloodline
Fake Smile
Bad Idea
Make Up
Ghostin
In My Head
7 Rings
Thank U, Next
Break Up With Your Girlfriend, I'm Bored