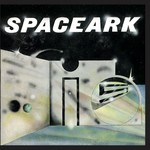 'SpaceArk Is' came out on Color World records in 1976, on a limited run of about 5,000 copies. It followed their self-titled debut (also available now on Mr Bongo) on the same original label, the year before.

For a handful of years in the Seventies, SpaceArk was one of the most promising and electrifying bands in Southern California. Although their music was far greater than the sum of its parts, those parts made for a very original style. R&b, soul, rock, pop, jazz, classical … it all came together in blissful stream of intricate compositions that swept up crowds from US military bases to Northern Soul clubs around the UK.

SpaceArk wrote and performed more than 100 songs during their time together. Most of them were not recorded and are now either lost or forgotten.