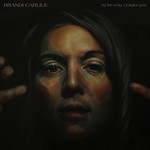 Brandi Carlile
By The Way, I Forgive You

Produced by Grammy-Award winning producer Dave Cobb and acclaimed musician Shooter Jennings and recorded at Nashville's historic RCA Studio A, By The Way, I Forgive You includes ten new songs written by Carlile and long-time collaborators and bandmates Tim and Phil Hanseroth.

Listed in a host of Best Of 2018 polls (including in Elton John and Barack Obama's personal lists), By The Way, I Forgive You finds US singer songwriter Brandi Carlile reaching new heights with her potent voice and lyrics. Last year saw Carlile reach a number of new career highs, with revered performances on Ellen and The Late Show With Stephen Colbert; a number one chart peak on the Billboard Top Current Albums chart, Rock Albums chart and Americana/Folk Albums chart; and a cameo performance in A Star Is Born.