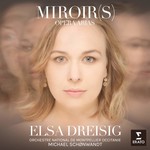 Miroirs is the debut album from the young French-Danish soprano Elsa Dresig. The winner of Plácido Domingo's Operalia singing competition in 2016, she has performed opera in Berlin, Paris, Zurich and Aix-en-Provence and sung with Sir Simon Rattle and the Berlin Philharmonic in Berlin, Salzburg, Lucerne and Paris.

Miroirs showcases her vocal and dramatic range with different 'reflections' on a situation or character in arias and scenes from operas by Gounod, Massenet, Rossini, Mozart, Puccini, Richard Strauss and the rarely-heard Daniel Steibelt. The album includes two world premiere recordings.

"This is [Dreisig's] debut album and it is phenomenally good. First there is the concept of juxtaposing arias for the same dramatic character by different composers…Next, stylistic variety enables the marvellous flexibility of the Montpellier Occitanie orchestra to come to the fore…Finally, of course, there is Dreisig's voice, youthful yet assured, agile yet fluid, and powerful through its entire range…we can certainly expect much more to come from this singer" BBC Music Five Stars

"Now here's a striking debut…[There Is] a pretty wide spectrum of characters on which to reflect…But Dreisig saves the real surprise for the end…the blood-drenched final scene from Strauss's Salome. Or rather Salomé…The vocal range is extremely wide and it requires a true singing actress but Dreisig makes a most convincing case, with plenty of silvery steel as the debased teenager. [Schønwandt] is in his element." Gramophone

"She proves well suited to the breathless excitement of Gounod's Jewel Song and finds the essential delicacy and inward quality for Massenet's Mirror aria…There's an apt frailty to her voice for Gounod's Juliette, where she is committed and impassioned…The accompaniments are suave if on the bland side." Opera

"Dreisig has a fresh and attractive soprano, best shown in the lyric roles she chooses here. So her Massenet Manon has charm, her Puccini Manon is a touch light of tone. She does provide a couple of world premiere recordings, with an aria from Steibelt's rarity, Roméo et Juliette, performed against a complete version of Gounod's Juliette, both girls caught in extremis in the potion scene." OperaNow