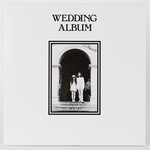 Originally released in 1969, John Lennon and Yoko Ono's Wedding Album was the couple's third experimental, album-length record, following Unfinished Music No. 1: Two Virgins (1968) and Unfinished Music No. 2: Life with the Lions (1969), and one of the most remarkable of the duo's testaments to an intense romantic and artistic partnership that would last fourteen years, until Lennon's tragic passing in 1980.

With Wedding Album, Lennon and Ono created an enduring snapshot of a vibrant pop-cultural moment, with the hostilities of the Vietnam War as its bracing backdrop. Featuring "John & Yoko," a call-and-response duet (John and Yoko calling out each other's names seductively, playfully, and longingly over the sound of their own heartbeats); Yoko's "John, John, Let's Hope for Peace"; snippets of interviews with reporters; and John's a cappella version of the Beatles' song "Good Night," Wedding Album captures the humour, earnestness, and spontaneity that marked the early years of the "Ballad of John and Yoko" era.

LP is pressed on white vinyl and housed in a box filled with souvenirs of John and Yoko's nuptials: photographs, a copy of the couple's marriage certificate, both Lennon's and Ono's drawings, a picture of a slice of wedding cake, and more.