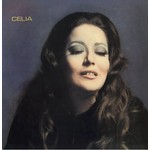 Beautiful debut album from the incredible, Célia. Conducted & arranged by Arthur Verocai and Rogério Duprat; featuring songs by Lo Borges, Antonio Adolfo and Joyce amongst others.

Célia was a Brazilian vocalist who worked frequently with master arranger-composer Arthur Verocai in her early years and many other heavyweights over the course of her extensive career.