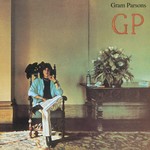 Gram Parsons' debut solo album, originally released in 1973. This 180 Gram RSD release contains the additional 7" vinyl with the tracks 'She' and 'That's All It Took'.

Given Gram Parsons' habit of taking control of the bands he played with (and his disinclination towards staying with them for very long), it was inevitable that he would eventually strike out on his own, and his first solo album, 1973's G.P., is probably the best realized expression of his musical personality. Working with a crack band of L.A. and Nashville's finest (including James Burton on guitar, Ronnie Tutt on drums, Byron Berline on fiddle, and Glen D. Hardin on piano), he drew from them a sound that merged breezy confidence with deeply felt Southern soul, and he in turn pulled off some of his most subtle and finely detailed vocal performances; "She" and "A Song for You," in particular, are masterful examples of passion finding balance with understatement.

Parsons also discovered that rare artist with whom he can be said to have genuinely collaborated (rather than played beside), Emmylou Harris; Gram and Harris' spot-on harmonies and exchanged verses on "We'll Sweep out the Ashes in the Morning" and "That's All It Took" are achingly beautiful and instantly established her as one country music's most gifted vocalists.

On G.P., Parsons' ambitious vision encompassed hard-country weepers, wistful ballads, uptempo dance tunes, and even horn-driven rhythm and blues. He managed to make them all work, both as individual tunes and as a unified whole. If it falls just short of being his greatest work (an honor that goes to the Flying Burrito Brothers' The Gilded Palace of Sin) thanks to a couple songs that are a bit too oblique for their own good ("The New Soft Shoe" may be beautiful, but who knows just what it's supposed to be about), this album remains a haunting reminder of Parsons' talent and influence, and has only gotten better with the passing years.
5 / 5 All Music Guide.

Side One:
Still Feeling Blue
We'll Sweep Out The Ashes In The Morning
A Song For You
Streets Of Baltimore
She

Side Two:
That's All It Took
The New Soft Shoe
Kiss The Children
Cry One More Time
How Much I've Lied
Big Mouth Blues