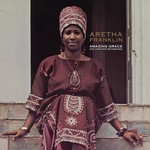 Recorded over two nights at the New Temple Missionary Baptist Church in Los Angeles in January 1972, Amazing Grace went on to become Aretha's biggest-selling album and the best-selling live gospel album of all time.

Amazing Grace originally included 13 songs, plus remarks by Reverend C.L. Franklin. In 1999, the album was remastered and expanded to include all the recordings from both nights.

A documentary was planned to accompany the Amazing Grace album, but technical issues kept the film from being released for nearly 50 years. That changed last November when Amazing Grace, at long last, premiered at the 2018 DOC NYC, America's largest documentary film festival.

A1. Organ Introduction (Ken Lupper)
A2. Opening Remarks
A3. On Our Way (Southern California Community Choir)
A4. Aretha's Introduction
A5. Wholy Holy
A6. You'll Never Walk Alone
B1. What A Friend We Have In Jesus
B2. Precious Memories
B3. How I Got Over
C1. Precious Lord, Take My Hand / You've Got A Friend
C2. Climbing Higher Mountains
C3. Give Yourself To Jesus
D1. Amazing Grace
D2. My Sweet Lord

A1. Organ Introduction and Opening Remarks
A2. On Our Way (Southern California Community Choir)
A3. Aretha's Introduction
A4. What A Friend We Have In Jesus
A5. Wholy Holy
B1. Climbing Higher Mountains
B2. God Will Take Care Of You
B3. Old Landmark
C1. Mary, Don't You Weep
C2. Never Grow Old
D1. Remarks By Reverend C.L. Franklin
D2. Precious Memories
D3. My Sweet Lord