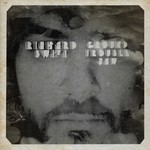 Ground Trouble Jaw is the lens that pulls Swift's catalogue into a focused oeuvre. It was the first release that folded the tireless, vying personalities of Richard Swift's art - the art brut R&B of Onasis; the John Fante saloon player of The Novelist; the Brill Building songcraft of Dressed Up For the Letdown - into a singular, succinct artistic statement. Here is a man discovering at once his own capacity for timelessness. The triumphant, Sly Stone burner "Lady Luck" feels like a song your heart knew before you did, a ripe jazz apple that Swift plucked on a stroll through the orchard. You can feel his joy and the responsibility of his personal discovery. You can imagine a not-to-distant future in which parents and children slowdance together at weddings to the childhood sweetheart doo-wop of "Would You." The electric artistic breakthrough is palpable.

Walt Wolfman's blown-out, basement R&B speaker-shredders are not for the faint of heart. Highlight of the set, "MG 33" is a raw and ghostly trance, a blast of kinetic energy and that jazz apple smoke blown right in your face. The quasi-title track "Walt Whitman" is a cryptic salute to Whitman, whose American lineage of primal, urgent art can be traced to include Kerouac and Ray Johnson, Bo Diddley and Beefheart - right on through to Swift himself. He was an outsider-pop wanderkind who could do more with one worn, old mic than most men could with a high-end studio, taking "the holy moment" and making it eternal.