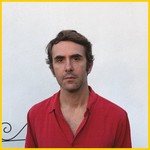 Throughout 'Rendered Armor' familiar influences reveal themselves, but the band doesn't rely on derivative imitation. Instead, Ritual Howls forge haunting atmospheres that are all their own, reaching into unexpected sonic domain. Each track unfolds with unnerving anticipation, as if sound tracking a chase scene in a surrealist western film. Bancell delivers his baritone above a jangling guitar like an incantation, evoking macabre, religious imagery laden with futuristic undertones. Propelled by Saginaw's often fuzzed-out bass and Samuels' dance club-friendly rhythms, it's no surprise that the band hails from the techno capital of the US.

Opening the album with a gloomy country-tinged guitar hook, "Alone Together" sets an ominous tone as Bancell narrates a love story in a doomed world, coloured by a glassy synth that sounds as if it were summoned from a horror movie. A sense of longing pervades "Thought Talk" with its subdued, hi-hat accented tempo, spacious bass line and reverb soaked guitars that ring out with melancholy. Ritual Howls' most mature offering to date, 'Rendered Armor' finds the band further carving out their own eclectic mix of organic instrumentation and pulsing electronics, distinguishing them as a unique force in the current landscape of underground music.