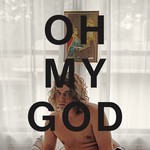 With his four acclaimed solo albums and myriad records of various collaboration, Kevin Morby has become a true musical auteur. Each record possesses its own unique persona and explores intriguing themes and fertile terrain through shifting, focused textures and dexterous, dedicated skill. And now, with the lavish, resplendent, career-best double LP Oh My God, Morby delivers a grandiose director's cut of his biggest statement to date, epic in scope as well as sound.

In January 2017, preceding the release of his fourth solo record City Music, Morby went into producer Sam Cohen's Brooklyn studio for four days to record a handful of material written with his usual folk-meets-lo-fi-electric-guitar sound in mind. Cohen, with whom Morby made his 2016 breakthrough Singing Saw, had started recording the new songs with a business-as-usual mentality when on the third day he was struck with an idea: Rather than create what was becoming Singing Saw: Part 2, what if they stripped everything back and used only a few colours at a time instead of the entire Morby rock palette?

This synesthetic concept plays into the broader vision for the record. Never has Morby zeroed in on an overall aesthetic to the degree of detail that he as with OMG, from album art to every visual element.