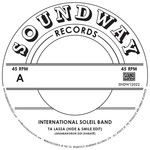 Also featuring Mory Djely Kouyate, this track was a staple of the 22 band's repertoire in the 1970s (in which many of the ISB played).

This 12" features an extended Hide & Smile edit on the A side and the original album version on the flip. An extended intro of throbbing bass and keyboard interplay punctuated by classic Guinea guitar lines, metronomic drumming and 80s synth sweeps eventually drops into a more recognisable Guinean vocal outing.