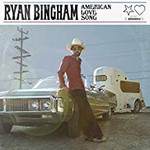 Ryan Bingham has been pondering the meaning of America lately - the optimism in the midst of struggle, the triumphs amid the losses. Men and women looking for a fresh start. Families like his, who pinned their hopes on the next town or job, always chasing that ephemeral dream.

Bingham has lived it all, and sometimes all at once. Just as his song "The Weary Kind," featured in the 2009 movie Crazy Heart, thrust him into the national conversation - winning him Oscar, Grammy and Golden Globe awards - he lost his mother to alcoholism and his father to suicide.

Nearly a decade and two albums removed, he's pulled together a surprisingly upbeat, bluesy collection of songs that doesn't shy away from big-ticket topics. American Love Song [Axster Bingham], out February 15th, is his most personal and political album to date, a rolling blues-country workout awash in slide guitar, soaring gospel-roadhouse stomps and meditative folk fingerpicking that takes on his past with a cautious hope for the future.

Growing up on the margins in a ranching family set adrift, Bingham learned from the jump what it's like to be on the outside looking in. His family's land in New Mexico was gone by the time he was old enough to know it, scattering his extended family among the oil fields from Bakersfield to the Texas coast in search of steady work. The Binghams traveled light, and no matter where they landed, it never lasted.

"[Before each move], my old man would pawn a lot of shit, and we didn't have a lot of room to pack stuff," Bingham said. "You kind of had one box and whatever you could fit in it, that was what you got to take."

Festering drug and alcohol problems followed them from job to job and kept them on the move, never to the nice side of town. While each relocation may have been a chance to start over to his parents, for a schoolkid the revolving door was a challenge to navigate.

"It was kind of holding on to these little pieces of an identity as you moved around to these different places, trying to hold on to who you are, but at the same time you always had to adapt to this new situation," he says.