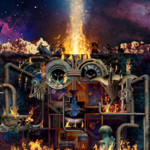 Nearly half a decade has somehow elapsed since the last Flying Lotus album - the Grammy nominated You're Dead!.

During that intermission, the multi-disciplinary Los Angeles artist has remained in constant orbit, collaborating with Kendrick Lamar on the classic To Pimp a Butterfly, playing a key role in the production of Thundercat's Drunk and writing and directing the horror film Kuso. He's also nurtured his Brainfeeder imprint into the most consistently innovative record label of the decade.

Enter Flamagra - a work that sweeps up every quantum advance and creative leap of the last dozen years of Lotus' career and takes them even further.

Drawing the lines between the galaxies of funk, global dance music, hip-hop, IDM, jazz, soul, tribal polyrhythms and the beat scene of his hometown LA, Lotus creates a universe that is uniquely his own.

An afrofuturist masterpiece of startling originality.