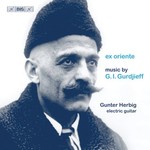 One of the great mystics of the early 20th century, George lvanovich Gurdjieff was born in Alexandropol on the border of Russian Armenia and Turkey. As a young man, he began to travel east as far as Tibet, Afghanistan and Central Asia, in search of spiritual enlightenment. Visiting ancient temples, Gurdjieff learned from spiritual teachers and absorbed music from all the places he visited. On his return to the West, he gathered a group of followers who were drawn to his charismatic personality.

One of these was the pianist and composer Thomas de Hartmann, and a unique collaboration between de Hartmann and Gurdjieff ensued which would produce well over 300 piano pieces. Gurdjieff would play his melodies on the guitar or the piano and de Hartmann would write them down, harmonize and provide them with minimalistic accompaniments.

The guitarist Gunter Herbig came across Gurdjieff's writings and music in his youth. For decades he cherished the idea of transcribing these pieces for his own instrument, but it wasn't until he began to experiment with an electric guitar that he found a way of doing so.