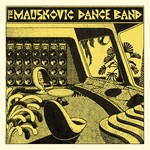 Entirely self-produced, the band has reiterated their favourite elements of the 70s and 80s legacy of the Afro-Latin psychedelic music of Colombia and Peru, interpreting it through the context of modern day Amsterdam. The output is a lo-fi No Wave groove all its own - rooted in a deep love of champeta, Palenque, psychedelic cumbia, chichi, classic afrobeat and picó soundsystem culture.

Constantly in demand for live shows, not only does The Mauskovic Dance Band's music flourish on stage particularly in a club, this time it was made in one. The album was recorded in the storage space of Amsterdam's Garage Noord, a recent addition to the scene but already a favourite amongst clubgoers for its forward-thinking programming. Its industrial yet intimate nature permeates the album, lending it a pulsing, hypnotic and hazy atmosphere.

A1. Drinks By The Sea
A2. Space Drum Machine
A3. Same Heads
A4. Dance Place Garage
B1. Alto In Vacanza
B2. Late Night People
B3. Percussione & Spazio Sounds
B4. It's The Wrong Goodie