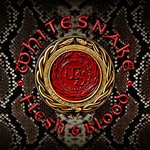 Joining Coverdale on Flesh & Blood is the powerhouse band comprised of Reb Beach and Joel Hoekstra on guitar, Michael Devin on bass, Tommy Aldridge on drums, and Michele Luppi on keyboards.

Joel Hoekstra and Reb Beach have both stepped up on Flesh & Blood by co-writing a number of tracks with David Coverdale. Hoekstra has really come into his own since joining Whitesnake in 2015. While, guitarist Reb Beach has stepped up to become the bandleader and guide the band to implementing Coverdale's musical vision.