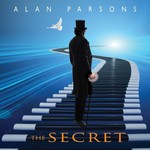 The 11-track album sees Parsons return to the pop-rock sound with symphonic and progressive rock interludes which his Alan Parsons Project was known for.