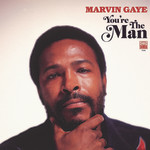 Double vinyl LP pressing. You're The Man is the first-ever planned lost Tamla/Motown album from Marvin Gaye. 15 of the album's 17 tracks make their vinyl debut and three tracks are newly mixed by SaLaAM ReMi. The album also includes a rare long LP version of Marvin Gaye's cancelled Christmas single, as well as an unreleased vault mix of its instrumental B-side, and new essay by Marvin's biographer, David Ritz. You're The Man was the album originally proposed to follow-up the monumental What's Going On.