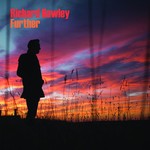 Further marks a departure for Hawley who has, to date, named all his albums after Sheffield icons or landmarks. Instead, for his new album he wanted something that would capture the intention of moving forwards, but without jettisoning his past.

Further is filled with short and potent tunes, the album was recorded primarily in Sheffield with co-producers Colin Elliot and Shez Sheriden.