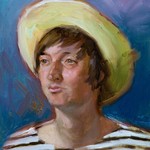 Mannion won the hearts of critics in New Zealand with two albums released simultaneously in 2003, Caterpillar and Butterfly, as part of the duo The Tokey Tones. He subsequently moved to the UK and was forced to take a break from music, though continued co-running Lil' Chief Records.

An older, wearier brother to the Tokey Tones music, 'Loving Echoes' is delicate, fragmented and painstakingly arranged. It is bold and ambitious like anything from Scott's hero Brian Wilson, but at the same time understated (think Young Marble Giants), with the tenderness and fragility of Sparklehorse.