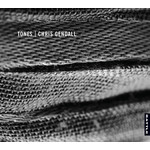 These works span 10 years of compositional output, and explore wide expressive terrain: from epic to compact, aggressive to introspective, earthy to mechanical. Their elastic rhythm, harmonic fluidity, and formal spontaneity make for dynamic - and often-demanding - listening and performing experiences. It's particularly special to hear these works performed with such verve, and mostly by the performers for whom they were written. These players, along with tonmeister Steve Garden, have given this album its sense of focus, sound, character, and quality. - Chris Gendall, May 2019

Notes On The Tracks:

The initial harmonic material for Dulcet Tones was derived from spectral analyses of tuning fork strokes. This small device enabled me to realise pitches (internally) while working on a score, and its subtle tone was audible only in close proximity to my ear. I was drawn to this sense of interiority, and to the interesting shifts of timbre between the tuning fork's attack and resonance. The title refers both to this sweetness of tone colour and tangentially to the dulcitone: a Nineteenth-Century keyboard instrument comprised of tuning forks struck by hammers - a precursor to the Fender Rhodes electronic keyboard.

SUITE for String Quartet was commissioned by Christopher Marshall, in (and with the) support of SOUNZ, the Centre for New Zealand Music. He suggested a suite of movements each inspired by historical stylistic models: chant, gigue, tango, the music of the second Viennese School, with each movement featuring one of the four players. SUITE was composed in residence at the Banff Centre in Alberta, Canada.

FRIENDS OF DISTINCTION (for solo piano, performed by Sarah Watkins)

Friends of Distinction is a suite of three movements, each of which is inspired by an existing keyboard work. "German Monoliths" was commissioned by Stephen de Pledge as part of a series of companion movements to Bach's Partita (BWV 827), intended in some way to replace Bach's intricate architecture with a landscape of structures wildly varied in shape and dimension. "Souvenir" is a short interlude whose point of departure is the spectacular Scarlatti G-major Sonata (K.455). "Fades" was commissioned by Katherine Dowling, and is a spiky, spontaneous response to "Wie aus die Ferne" from Schumann's Davidsbündlertanze.

Numerous texts and fragments begin with the words "inward goes," from the 18th-Century German writer Novalis to whimsical Māori whakataukī (or proverbs) about work ethic and eating. In this work, "inward goes" refers to the techniques required of the performer (and their instrument), the self-reflective nature of the musical material, and to the work's generally introspective mode of communication.

GOING LIKE MAD (for two pianos, both parts performed by Sarah Watkins)

The title of this piece was taken from the end of James Joyce's Ulysses, inspired by the text's rhythmic continuity and exuberance. It is designed to turn the piano into a kind-of deranged machine, flirting with total pandemonium. It was commissioned by New York's Continuum ensemble.