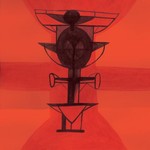 Nightmares On Wax
Back To Nature (Ricardo Villalobos Remix) 12"

Back to Nature, the opening track from Nightmares On Wax's 2018 album Shape the Future, gets remixed two ways by Ricardo Villalobos on this new EP. Unsurprisingly Villalobos takes his time here (though at around 10 and 16 minutes respectively the Lobos on Wax House Mix and Ricardo Villalobos Back to Earth Mix are far from the lengthiest tracks Villalobos has released).

Lobos on Wax channels the effortless cool of Moodymann in the way it blends soulful samples, elegant low end and a perky four-to-the-floor.

The minimal slurp of Back to Earth, a track that spools out its goodness in a series of small doses, is more in keeping with the classic Villalobos sound.

Ricardo Villalobos is a producer, craftsman and artist with very few contemporaries. Here he's twisted the shamanic chanting and cosmic strings of the original into epic, sprawling electro odysseys.

To present these in a fitting way, George Evelyn enlisted Craig Richards, another good friend and peer of both his and Ricardo's. Craig and Ricardo's back to back sets at Fabric are some of the most legendary moments in dance music. The release plays with the idea of a remix by asking Craig to interpret the music through his visual art for the sleeve.

A. Back To Nature (Featuring Kuauhtli Vasquez And Wixarika Tribe) (Lobos On Wax House Mix)

B. Back To Nature (Featuring Kuauhtli Vasquez And Wixarika Tribe) (Ricardo Villalobos Back To Earth Mix)