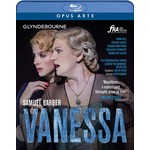 Abandoned by her lover Anatol, Vanessa retreats from the world, waiting and hoping with only her mother and her niece Erika for company. But when, 20 years later, Anatol's handsome young son arrives unexpectedly, he shatters the calm of this shuttered household of women. Past and present love collides, and the aftershocks threaten to destroy them all.

Samuel Barber's Pulitzer Prize-winning first opera boasts one of the 20th century's most beautiful scores. Poised constantly on the edge of song, Vanessa unfolds in generous swathes of melody, rich in filmic strings and soaring brass, with echoes of Puccini, Berg and Strauss. It climaxes in a final quintet of Mozartean poignancy - one of the great ensembles of the contemporary repertoire.

Outstanding performances are a-plenty in this rare opportunity to see one of the 20th century's great operas. This world premiere recording from Glyndebourne gives centre stage to Emma Bell who performs the titular role with an amazing intensity, with rising star Viginie Verrez and legendary Rosalind Plowright giving equally engrossing performances in this far too little-known masterpiece, in a new production by award winning director, Keith Warner.

"Jakub Hrůša leads the London Philharmonic in a very idiomatic performance. He emphasizes the frequently overlooked ominousness in the music, and brings a metallic sheen to the orchestra that combines well with Warner's overall conception. Of special note is his handling of the ensemble sections, especially the intensity he brings to the characters' final leave-taking in Act III." MusicWeb

"Veteran Rosalind Plowright, moving down from soprano to mezzo repertoire, is an effective Baroness; Edgaras Montvidas is a fine Anatol with a handsome presence, if not quite in Nicolai Gedda's league; Donnie Rae Albert is engaging as the Doctor (though again he is made to over-mug his inebriation for the announcement of Anatol's and Vanessa's engagement)." Fanfare