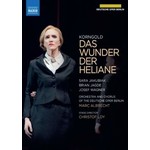 Erich Wolfgang Korngold regarded Das Wunder der Heliane as his greatest work, but the opera has been neglected since its premiere in 1927. This 2018 production from the Deutsche Oper Berlin features the American soprano Sara Jakubiak as Heliane, and the American tenor Brian Jagde as The Stranger in the award-winning director Christof Loy's acclaimed staging. The Orchestra and Chorus of the Deutsche Oper Berlin deliver the large forces required for this hyper-Romantic opera, under the baton of Dutch National Opera's chief conductor Marc Albrecht.