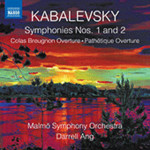 Dmitry Kabalevsky found his mature style and achieved international success with his first opera Colas Breugnon, the overture of which was soon picked up as an orchestral showpiece in the West. The Second Symphony was likewise championed by conductors such as Arturo Toscanini, its bittersweet sense of drama and lyricism comparable with Prokofiev. Dedicated to the 15th anniversary of the Bolshevik Revolution, the First Symphony illustrates progress from oppression to liberation, while the later Pathétique Overture is a rousing and highly effective reminder of Kabalevsky's skill in orchestration.

"Ang's performance of the overture is lively… Revisiting it, I can see why the Italian conductor liked it: it's mostly a rhythmic piece, built around rapid syncopated phrases with lots of orchestral color. It's a good "pops" piece but by no means a great composition.

The second symphony is more abstract in its themes and construction, though using similar driving rhythms. … Ang's conducting is pretty much spot-on, bringing out several salient details in the orchestration and providing a good driving rhythm…"© 2019 The Art Music Lounge