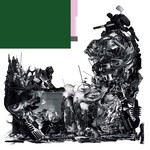 Since forming just over a year ago, black midi have quickly cemented their reputation as one of the hottest new underground bands, following a string of sold-out UK live dates and surprise shows punctuated by constantly shifting sets and blistering musicianship.

Schlagenheim was recorded with Speedy Wunderground producer Dan Carey, who the band praises for his quick, unfussy approach. black midi laid down eight of the record's nine tracks in just five days. The process was one of refining and rebuilding tracks around the initial structures. Five-hour jams would sometimes yield a riff that then became a few bars of a song. As anyone who's been lucky enough to catch black midi live over recent months will testify, black midi's songs are slippery creatures.

The foursome comprising black midi are all 19 and 20 years of age and have backgrounds steeped in music. Morgan Simpson grew up in a church and took up the drums when he was two. Georgie Greep started out playing along to the likes of Black Sabbath on "the OG" Guitar Hero. They all met at the Brit School and praise their education for giving them a vital grounding in musical collaboration. While studying, the group paid their way by teaching music and doing sessions for friends. Georgie Greep and Matt Kwasniewski-Kelvin would busk in south-east London, on some days playing Jimi Hendrix's "Purple Haze" or blues and soul tracks, and on others playing their own music.

If bands like Can or The Residents or Public Image Ltd only existed on paper, you would imagine that they'd sound a lot like black midi (and vice versa), but it is only through direct experience with the songs that make up this exceptional album that we realise that there are some things (including track names) that are best left unsaid, virginally awaiting the experience of the listener. - Line Of Best Fit