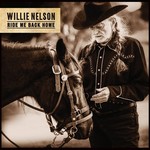 Willie Nelson
Ride Me Back Home

The legendary Willie Nelson presents Ride Me Back Home, the latest addition to his incredible catalogue.

Ride Me Back Home, which focuses on empathy, rounds out Nelson's trilogy about mortality which began in 2017 with God's Problem Child and was followed in 2018 with Last Man Standing.

Alongside new compositions from Nelson and producer Bunny Cannon, Willie also calls on favorite song-smiths including Sonny Throckmorton and Buzz Rabin and pays tribute to a variety of pop and country songwriters including Billy Joel, Mac Davis, and the late Guy Clark. The resulting album is a magical collection of tunes with emphasis on the lyrics.

Backed by an amazing band of Nashville gunslingers, Ride Me Back Home finds Willie Nelson making some of the most inspired work of his career.

1. Ride Me Back Home
2. Come On Time
3. My Favourite Picture of You
4. Seven Year Itch
5. Immigrant Eyes
6. Stay Away From Lonely Places
7. Just The Way You Are
8. One More Song To Write
9. Nobody's Listening
10. It's Hard To Be Humble (with Lukas Nelson and Micah Nelson)
11. Maybe I Should've Been Listening