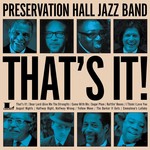 Preservation Hall Jazz Band's That's It! (2013) is an eclectic album that draws on the collective experience of players nurtured in the New Orleans tradition but determined to build something fresh and exciting on that foundation. It marks an important milestone in PHJB Creative Director Ben Jaffe's crusade to carry forward the Hall's original mission while making it relevant to today's audiences.

Now back in print on vinyl and CD via Sub Pop, which signed Preservation Hall Jazz Band in 2018, and will soon be releasing new music by the band.

B1. I Think I Love You
B2. August Nights
B3. Halfway Right, Halfway Wrong
B4. Yellow Moon
B5. The Darker It Gets
B6. Emmalena's Lullaby