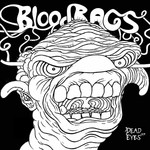 Five years of mucking about in their own rock'n'roll swill, brought together after the demise of two previous combos, the BLOODY SOULS and the DIRTBAGS, four stoopidly tall practitioners of the scraping of electric guitar strings and the smacking of brassy metal and plastic skins, have finally started spitting tangible relics of their activities into thee universe under the moniker BLOODBAGS.

Side A
Red Sally
Captain Swing

Side B
Cartoon Animal