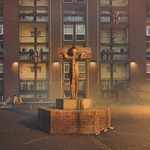 Slowthai
Nothing Great About Britain (LP)

slowthai knew the title of his album long before he wrote a single bar of it. He knew he wanted the record to speak candidly about his upbringing on the council estates of Northampton, and for it to advocate for community in a country increasingly mired in fear and insularity. Three years since the phrase first appeared in his breakout track 'Jiggle', Tyron Frampton presents his incendiary debut 'Nothing Great About Britain'.

Harnessing the experiences of his challenging upbringing, slowthai doesn't dwell in self-pity. From the album's title track he sets about systematically dismantling the stereotypes of British culture, bating the Royals and lampooning the jingoistic bluster that has ultimately led to Brexit and a surge in nationalism. "Tea, biscuits, the roads: everything we associate with being British isn't British," he cries today. "What's so great about Britain? The fact we were an empire based off of raping and pillaging and killing, and taking other people's culture and making it our own?"

'Nothing Great About Britain' serves up a succession of candid snapshots of modern day British life; drugs, disaffection, depression and the threat of violence all loom in slowthai's visceral verses, but so too does hope, love and defiance. Standing alongside righteous anger and hard truths, it's this willingness to appear vulnerable that makes slowthai such a compelling storyteller, and this debut a vital cultural document, testament to the healing power of music. As slowthai himself explains, "Music to me is the biggest connector of people. It don't matter what social circle you're from, it bonds people across divides. And that's why I do music: to bridge the gap and bring people together."