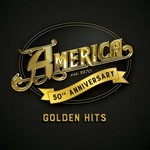 America celebrates its half-centennial this year with a trio of compilations that follow the iconic Grammy-winning band to the top of the pop charts, across musical eras, and deep into the hearts of innumerable fans.

The three-disc version of 50th Anniversary: The Collection brings the core of America's recorded legacy together with choice rarities like an early studio recording of "Ventura Highway", a live performance of "Riverside", and an unreleased demo for the #1 hit "Sister Golden Hair". All of the band's Top 10 singles are included here: "Horse With No Name," "Ventura Highway," "Tin Man," "Lonely People" and more.

The 2LP features a total of 25 tracks.

SIDE A:
A Horse With No Name
I Need You
Sandman
Three Roses
Everyone I Meet Is From California
Don't Cross The River
SIDE B:
Ventura Highway
To Each His Own
Only In Your Heart
Muskrat Love
Green Monkey
Rainbow Song
SIDE C:
Tin Man
Another Try
Lonely People
Hollywood
Daisy Jane
Woman Tonight
Sister Golden Hair
SIDE D:
Company
Today's The Day
Amber Cascades
God Of The Sun
Political Poachers
You Can Do Magic