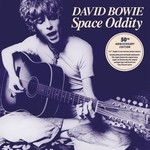 Limited box set. Space Oddity (50th Anniversary EP) comes in a boxed set including a double-sided poster featuring an original "Space Oddity" print advertisement and a Ray Stevenson shot of Bowie taken on stage at the "Save Rave '69" concert at the London Palladium on November 30, 1969, the backdrop featuring a N.A.S.A. astronaut. The set also includes an information card and a print featuring an alternative shot by Jojanneke Claassen from the "Space Oddity" promo single cover session.

Space Oddity was a giant leap forward for David Bowie in terms of songwriting as compared to his eponymous debut and it is considered the first truly essential Bowie release.

Noted for a list of collaborators, including session players Herbie Flowers, Tim Renwick, Terry Cox and Rick Wakeman, Space Oddity delves into psychedelic folk-rock, as well as prog, with its genre-defying template and it helped create a blueprint that over the next decade would make Bowie the most inimitable British artist.