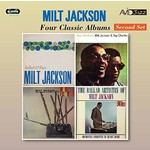 It's Milt Jackson! Need we say more? One of our favourite artists makes a long awaited return to the New Release schedules! We're following a more bluesy and "ballady" based theme through our four fine selections including a remarkable album with the legendary Ray Charles, Soul Brothers, where we find the two men in somewhat unfamiliar musical territory. Ray playing piano and alto sax (and brilliantly at that), but resting the vocal chords this time, while Milt can also be heard on piano and guitar, in addition to vibes, of course! For Bags & Flutes, Milt is joined by two fine flute players Bobby Jaspar and Frank Wess while completing a fine line up are Tommy Flanagan and Hank Jones on piano, Kenny Burrell on guitar, Percy Heath on bass and Art Taylor on drums.