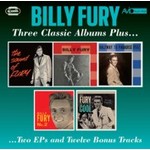 Born in Liverpool as plain old Ron Wycherley, our latest UK Rock 'n' Roll hero was another one of the many young hopeful musical recipients of a new "cool" name bestowed upon him by legendary musical impresario Larry Parnes. Other recipients being, of course, the likes of Marty Wilde, Vince Eager, Adam Faith and ah um Johnny Gentle. Geez, Larry sure knew how to pick 'em!! Billy would go on to find great acclaim during the pre (and briefly post) Beatles era of British rock n roll glory appearing regularly on the legendary TV shows 6.05 Special, Oh Boy!, Thank Your Lucky Stars and Top Of The Pops, alongside such other great Brit rockers as Cliff Richard, Marty Wilde, Adam Faith and Joe Brown. Without any doubt however, the massive difference between Billy and all the other pretty boys was that he had genuine talent, both as a singer and a songwriter, not to mention a huge dose of that intangible pop star thing, Charisma! In the Rock n Roll Hall of Fame, up above, which is getting pretty crowded these days, Billy Fury is still high up there among the greatest ever British stars.